The A2 is a disc you know can be counted on over and over. It's a beast in the wind, and does exactly what it's named to do--approach--with precision. It doesn't need much more to make it an instant candidate for the bag, but we decided to spice it up anyways.

They've got the stellar swirls of our 400 Spectrum Plastic and the Huk Lab TriFly for an extra dose of awesome.

The Prodigy Disc A2 is an overstable utility disc that fills the gap between midranges and putters. The A2 is perfect for power throwers who want to avoid the possibility of their shot turning over. The disc is consistent and reliable in all wind conditions and perfect for short, trick shots as well as high wind approach shots. The A2 is a beadless cousin to the A1 and will fly just slightly less stable than the A1. You can expect and extra 30 to 40 feet of glide than the A1. I just randomly bought my first A2 as an add-on to use up the rest of a $50 gift card after grabbing the KJUSA H2 V2 and M3.

I almost didn't bag the A2 at first because it was so crazy overstable, but then I saw the value in having such good distance control (only been playing since Oct '19) and it's been bagged ever since.

You know that disc you have that everybody asks "what disc is that?", this is definitely one of those for me. But now they know what disc it is and they see what I'm doing with it, so now they're saying "I need to get one of those too."

So I say "fate's own hand put that disc in my bag". I didn't have the A2 on a wishlist, it wasn't a disc I saw one of the pros throwing (though I did recently learn that KJUSA and Seppo Paju both throw A2s a lot), it was just by chance that I found the perfect approach disc.

Your experience doesn't have to be half so dramatic. It should go something like this:
1) Buy A2 in multiple plastics
a) 350G lightweight for max fade and little skip
b) 400 max weight for longer approaches and more ground action
3) 400 HukLab to stunt on fools
2) Take all overstable discs under 7 speed out of your bag
3) Replace with A2s
4) ???
5) Win. 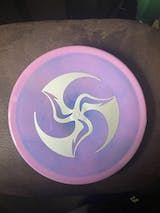 Nice overstable flight with the beautiful spectrum plastic and the huk stamp! Beauty, immediately made the bag!