The Prodigy Disc T2 is rated by the PDGA as a Championship level target, the highest-ranking possible. The Prodigy T2 has a 16-8 chain configuration that incorporates the patent-pending Prodigy StrikeZone, which is made up of 24 inner chains. This assembly creates, what we consider, the most forgiving and reliable catching device on the market. It is virtually impossible to have a disc pass through this assembly or bounce out. Unlike the T1, the T2 is more forgiving on putts that are slightly off-center. The T2 is the most affordable target in its class.

The T2 Prodigy Basket, either permanent or portable is simply the best and most practice disc golf basket you can buy. The horizontal chain design and the dual wheeled base are two characteristics other baskets would love to have. Available in 6 colors and the price is very affordable. I now own 9 for my ace run residential disc golf course and give it 5 stars for this review.

First, once you get this beast of a basket together you are going to love it! It catches great, as well as having a unique change sounds which is pretty cool. However, I struggle to find a 5 star rating for this "championship" level basket. The first issue is that if you're going to pay over $400.00 for a basket, it would be nice if it could include assembly instructions. Also, the lack of a ground sleeve is a pretty big disappointment.
In terms of fit and finish, it is definitely a pretty basket, nice power coat, but the 2 piece pole hurts the soul for a basket of this caliber. Also, the fact that the threaded screw holes are "covered" with screws during the powder coating process is logical, but not removing those screws before the end user leads to confusion (lack of instructions again). Also, you'd expect a basket of this caliber to be built to fairly high tolerances, but there's almost an 1/8" between the upper and lower assemblies and the pole as well as about 5 extra/erroneous holes in the assemblies that aren't actually used for anything.

Overall, super solid basket, literally haven't been able to throw a shot hard enough to get anything to bounce out off the chains, but there are a few things I'd like to see improved before I purchased another one.

Well I was looking for a practice basket that would increase my confidence (no spit outs or pull bounce backs). Let’s just say my putting has never been better and I always look forward to using the T2.
There is only one bad thing, I’ve had my basket for 2 months now and it’s spring so lots of rain. The basket is built very well and I can tell it will last a long time BUT we’re the cut was made on the pull (very top and very bottom) rust is already appearing. This is sad because of the money I spent on the basket. I believe it will still last a very long time, but the years will be diminished due to this rust. Prodigy you make one hell of a basket, if these two spots could be galvanized like the rest of the basket, you’ll win the best practice basket on the market

This basket is awesome! Delivery was quick, it looks great, and the quality is excellent. The only thing that could have made it better is if it came with assembly instructions but it wasn't too difficult to figure out. 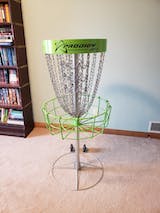 G
Gary W.K.
This is the right basket no matter what you are looking for

This is the best performing basket on the market. Tests show greater than 99% catch rate. I think that this is low. I haven't had any missed catches in over 1,000 throws. I think Prodigy took it personally that the previous version (T1) didn't perform like the competitors. Now, the T2 outperforms them all.
I can't imagine higher quality. I mounted 9 of these with ground sleeves in cement. Baskets slide in to ground sleeves perfectly and everything is made to stand up to industrial use. The powder coating is beautiful and made to last.
Easy installation. If you can have your holes dug by someone else, or with a machine, then you have it as easy as it gets. The ground sleeve has the L-bracket at the position where you install the sleeve so that the L-bracket is level with the ground. This makes all baskets at the perfect height and uniform with each other.
They are beautiful. Our 9-hole course chose blue and we are all thrilled. However, the other colors are great and you can't go wrong.
The best price. Right now, these baskets are an incredible value. I don't know if Prodigy is taking a small profit margin to emphasize mass distribution, but the value is so good that I feel guilty getting something so good.
Great service after the sale. I dropped/lost one of the 36 set screws during installation. They immediately sent out 8 at no cost to make sure I was OK.

So...most everything bought today comes with trade-offs. Better- but more money, Nothing better than satisfactory performance or looks- but cheap price. Not with the Prodigy T2- you get it all. Get them now before everyone realizes how good they are and you have to wait in a 2 year backlog.

Can't beat the price- all the other pro level baskets cost more and rarely include shipping. All the good putts have gone in and I've had it for over a month now, daily practice. Double wheels are awesome for easily moving this heavy basket around. 5 stars hands down. (I've been playing ~20 years)

The Prodigy T2 is an amazing value for a top-tier basket. All of the controversy of the T1 seems to be gone. Dead center putts don't push back out, and wide putts catch very well - on par with the competition. With a nice build and lots of color options, what you've got here is a great catching basket at about 3/5ths the price of some of its competitors in this range.

I bought a couple of T2 baskets. The ordering process was easy, the baskets came on schedule, they were easy to assemble, they are very high quality, the orange color is very visible. I’ve played several courses with these baskets on them and liked the quality and how they caught discs. I’m finding my new baskets have the same qualities. If you are looking for a high quality, visible target, that catches well, and should last years, you will be happy with the T2 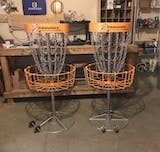